Have you ever felt like you were under attack?  I’m sure these golden lilies do.  Look carefully at a leaf between the middle lily and the one on the right.  I think you will see the tiny villain . . . the colour often associated with you know who . . . but you can’t see his pitchfork.  Nonetheless, the lilies are not going down without first bequeathing to the world what they have been preparing all winter:  a perfume of rarest loveliness. 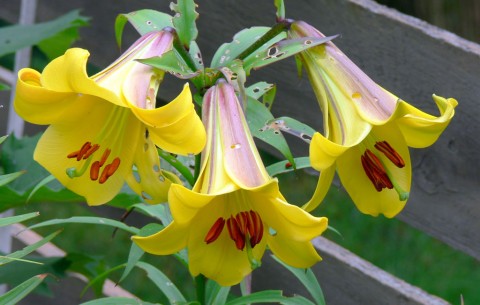 The Treefrog was up to his old tricks of scaring the wits out of me.  Opening the shed door, there he was inside its edge.  He needn’t think I wouldn’t recognize him just because he had changed into his jacket of light grey!  We were on our way to church.  Maybe I should have invited him to come along, seeing as he was all dressed up.

Cedar Hollow had many visitors this afternoon, including a white-throated sparrow! I do hope he sticks around.  He is such a beautiful singer! 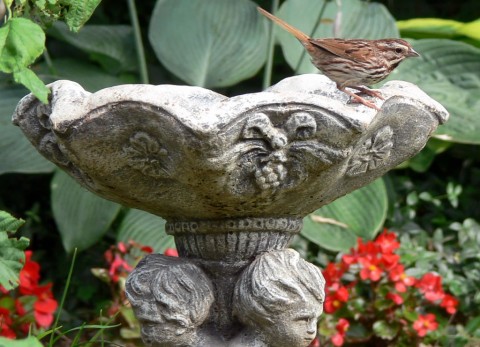 Most of the visitors were quite civil.  Most . . . but not all, and I’ll get to that in a minute.

A pair of cardinals careened in and out of the yard, and a large butterfly wearing a plain orange gown paused to rest on a step near the pond.

Please excuse Father Robin’s back.  His manners are generally impeccable, but this afternoon he is intent on training his youngsters, and simply has no time for the camera. 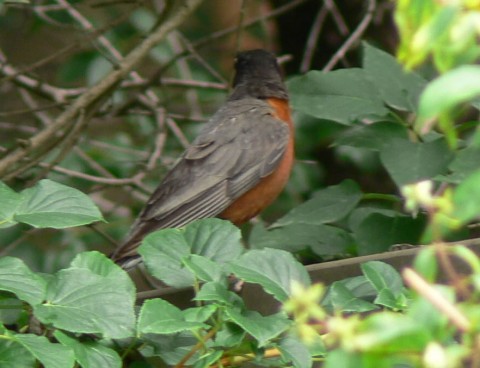 His offspring is almost as big as he is, but not half as handsome.  In fact, don’t you think he’s kind of gangly looking? 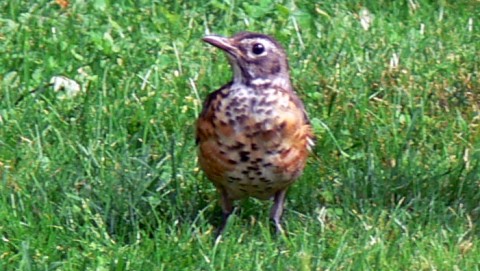 His messy, speckled vest looks like something he picked up at a flea market!  The poor chap is hungry, and is trying to follow his father’s instructions about how to find tube steaks!

Lord and Lady Wren are practically wearing out the hinges on the front door of the Swiss Chalet these days.  Their youngsters’ appetites are very demanding.

And then, without warning, it happened!!  Fasten your seatbelts, folks!

A white-breasted nuthatch landed on the branch from which the Swiss Chalet is suspended. 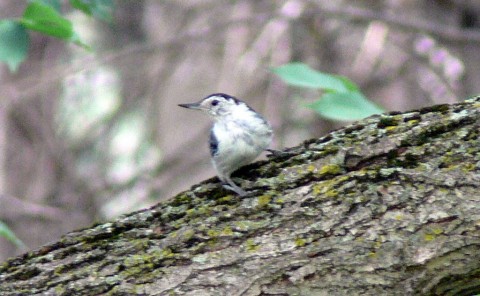 He had the audacity to poke his face right into the front door of the Swiss Chalet!  Mr. McD and I gasped!!

Lord Wren revved up the engine of his fighter-jet! 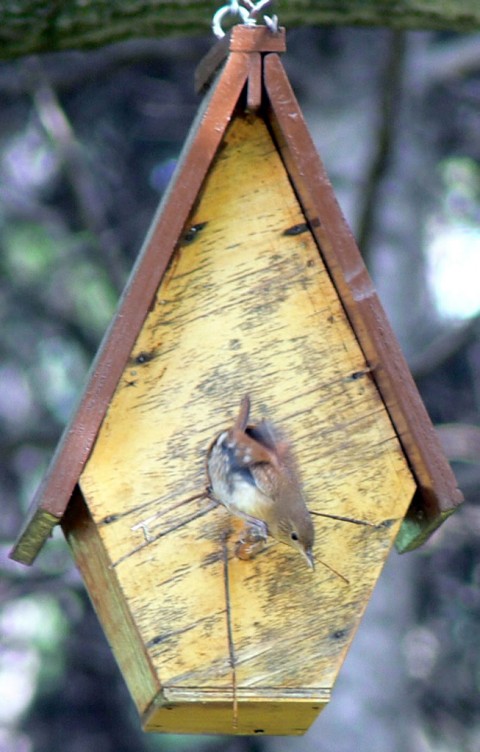 Down ‘round the forsythia, through an opening in the gate’s lattice, out into the big forest Lord Wren chased him!  Who knows how far the feisty Wren tailed the nuthatch who never flew so fast in all his life.  The thin beak of Lord Wren is a fearsome sword.  I dare say the nuthatch is still having nightmares over that blunder.