The rain came down by the bucketful last night.  In fact, Kitchener received 71 cm of rainfall overnight.

It’s amazing how flowers can be pummelled, and yet withstand the assault quite well.  The lily on the hosta was probably in bud form during the downpour, so suffered no damage to her star-dusted gown.  Do bend over and enjoy the hosta’s perfume whenever you are near one.  Would you believe that it is similar to lily of the valley? 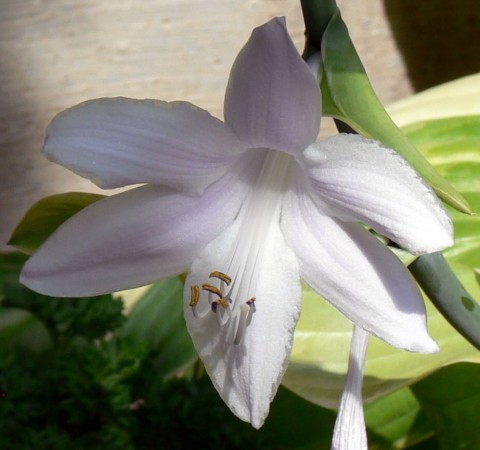 The rain continued until shortly before noon.  A goldfinch braved it over to her favourite take-out counter, and didn’t bother to bring an umbrella along!  If you look closely, you may be able to see the slant of the rain on the left. 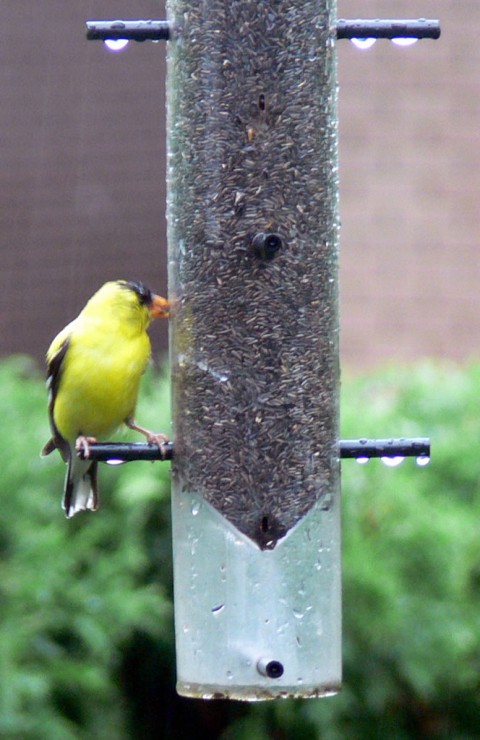 I put on a hooded jacket in order to fill up the hummingbird feeder, and chatted a moment with my neighbour who was also out and about in rubber boots.  She reported that baby robin was doing well.  He sleeps in his crib in her bedroom.  Hopefully the weather will be warmer tomorrow, and she will let me take a picture of him.  His name is Czechoslovakian:  Pipinka.

While I was picking the green beans before supper, a pair of goldfinches spent some time around the pond while Mr. McD was taking a break.  He reported that Mrs. Goldfinch perched on the end of a rock,  leaned over so far that Mr. McD was sure she would fall in, and took a couple of drinks next to a lily pad.

I hope she hasn’t been influenced by all the advertising hype about the big-sized drinks these days.  She could easily have drank from one of the two bird baths, but, no, she had to go to the BIG POND to drink . . . and it wasn’t even hot outside!   Mr. Goldfinch watched her from the top of the shepherd’s crook that holds the hummingbird feeder.   Before they left, Mrs. Goldfinch checked out the yellow daisies towering over the bird house called Cedar Shake on Black Pole Lane.

Butterball, the Grey Squirrel, cut through Cedar Hollow on his way into the woods. 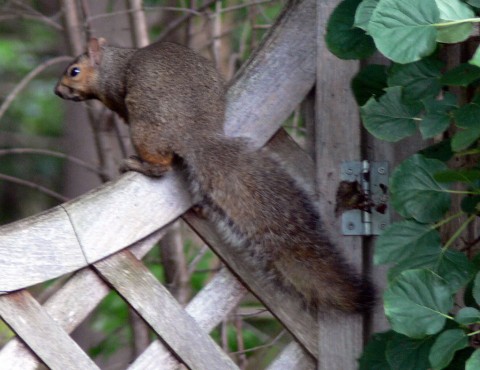 The sun was out once more by mid afternoon.  A white butterfly that has been flitting around all summer, refusing to alight on anything long enough to click a picture, now tried out about every chair or soft lounge she could find in Cedar Hollow!  Whatever got into her?   Here she is putting her feet up on the blue ageratum: 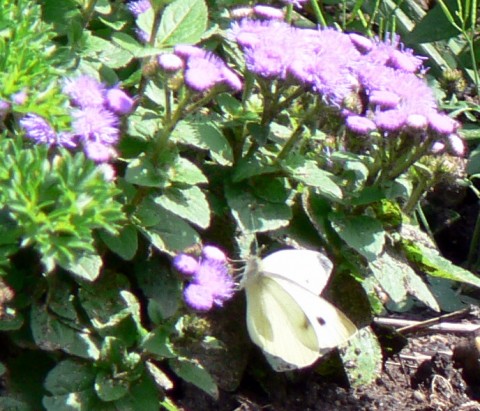 Next, she tried out the lazyboy in the purple petunia patch.  M-m-m-m.  It felt like velvet!

And then her afternoon visitation really got daring.  She stopped in to say hello to one of the waterlilies!  Why, I doubt if she even had an invitation, but that didn’t stop her. 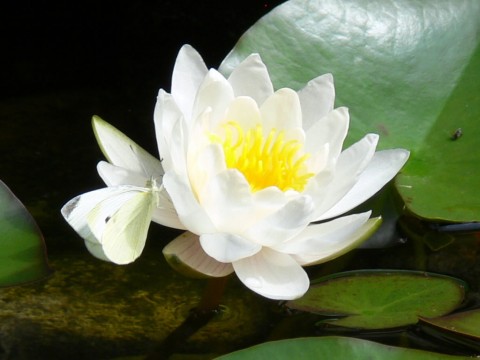 Maybe she is thinking of going water skiing one of these days, and wanted to size up the pond for herself.  It’s hard to measure things when you’re zigzagging past everything and you don’t seem to have a straight gear.

“You know,”  she whispered,“I feel ever so much better now.  Tell the folks that it really does pay to slow down and smell the hostas . . . or the waterlilies.”