There was tidying up going on in Cedar Hollow on the inside and on the outside!  Mr. McD Moved the old computer monitor out of the office, and removed a shelf that had held the big Dell tower.  That led to rearranging other things, installing hooks to hang some of them on, doing some rewiring to make power bars more accessible.

He got a kick out of phoning John and asking how many monitors he had.  When he answered “Two,” his Dad replied:  “Oh you poor thing.  I don’t know how I could live with less than three!”  (He had just hooked up my old monitor to his network, and is also able to switch over to the flat-screen TV as a monitor.)  John realized his Dad had relished preparing this arrogant question all afternoon . . . hardly able to wait for him to get home from work to spring it on him.

Meanwhile, I was busy trying to find the top of my desk, getting ready for the wireless computer.  All sorts of pieces of paper stashed here and there had to be filed appropriately or in the round file.  The old scanner was given a spot high up in a storage area where it could be brought back if a  slide needed to be preserved —   not one of those things that make you squeal out loud when you slip down it, no.  I mean the 35mm kind of of a thing.  Maybe you are too young to make sense out of what I’m saying.  Never mind.  Just check it out on Google.

With technology ever changing, how do we keep up with it?  What do you do with cassettes that were treasured not very long ago, and now just collect dust?  That BIG SORTING JOB will have to be done later.  Ever catch yourself saying something like that?  I’ve got good intentions.  You wouldn’t doubt that for a minute now, would you?

Outdoors, Lord and Lady Wren were going at quite a pace, and doing some tidying up of their own.  They came and went so fast, they were practically a blur! 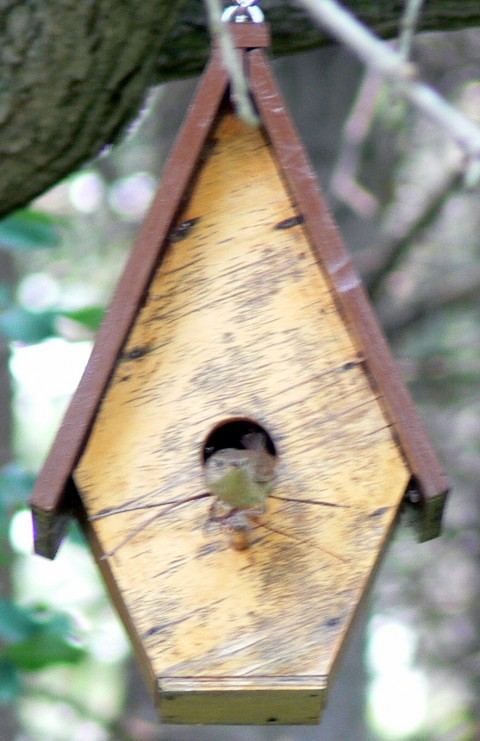 Several times I saw one of them fly out of the Swiss Chalet with a potty chamber filled to the brim!  They wouldn’t think of just tossing its contents out the door.  No way!  They winged the white cargo into the neighbour’s yard.  Free fertilizer!  Well, I think it’s free.  I couldn’t see from the swing whether they pecked at the neighbour’s door and handed them a bill or not, but that’s none of my business.

What the two of them really need is an air traffic controller.  It looked like they collided several times, arriving at the same instant, pushing in behind the other, or madly reversing and sitting on the clothesline while the other fed the demanding nestlings.  Why don’t they ease up on the throttle a bit when they see their mate heading for the entrance?  There doesn’t seem to be a YIELD SIGN anywhere in the walnut’s boughs!  What a state of affairs!

Around four o’clock, the nestlings had settled down for a nap.  All was quiet, beautifully quiet.  We turned off the falls to listen to the quietness.  Lady Wren spent some time preening on the wooden rail by the Prairie Sunset False Sunflowers.  She was partly hidden from view by its big leaves. 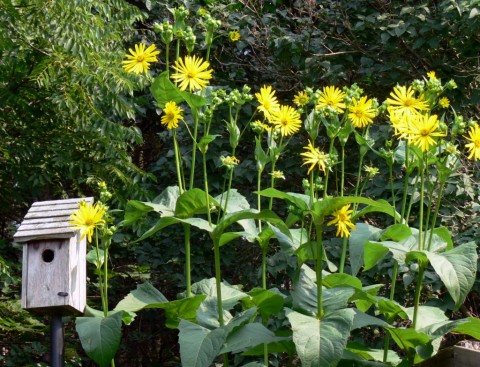 Close by, the tiger lilies are splashing their namesake’s colours about.  I love their brown velvet slippers!  Have you seen the shiny black balls attached to their stem?  Plant one, and you’ll have tigers in your garden, too! 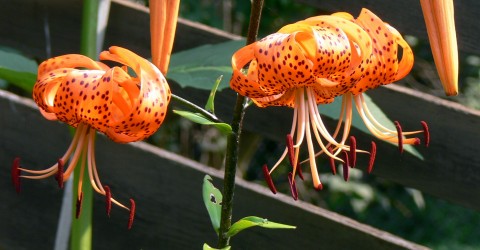 The cucumber vine, whose leaves are as rough as sandpaper on their underside, furnished us with delicious sandwiches yesterday.  Can you see a little cuc in the making? 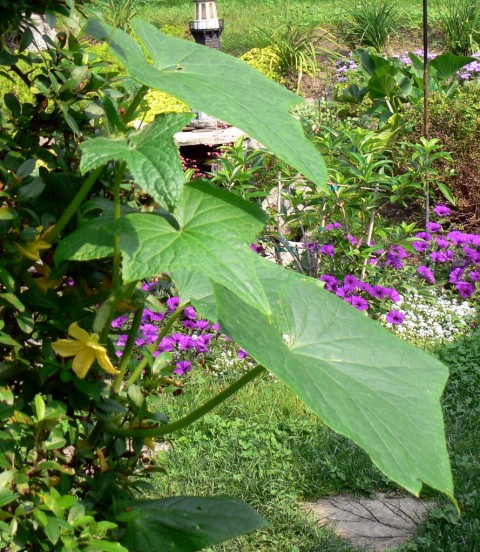 The crickets have begun singing, but sort of pianissimo so far.  Somehow they immediately remind us that mellow fall is just around the corner.  The sounds won’t be pianissimo in Fergus this week-end.  The Scottish Highland Games are on with the skirl of the bagpipes . . . the very music that sends chills down Mr. McD’s spine!  Yes, Sir!