Whenever we go out to the lawn swing, the camera comes along.

I thought Mr. B was digging worms for Pipinka by his back fence. 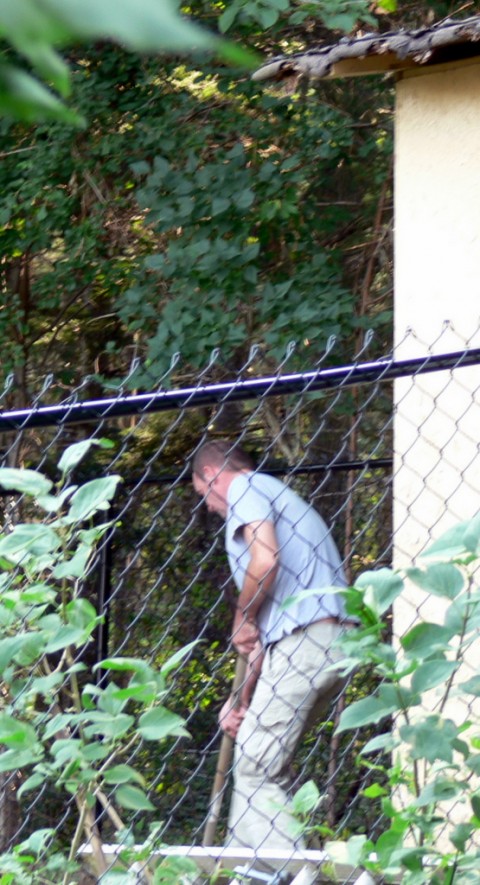 As he began heading toward his house, he saw us, and broke the bad news.

“Pipinka died at two this morning.”

I could not believe my ears!

“He started to go downhill in the early afternoon.  Didn’t want to eat; just kind of flopped around; didn’t go to the perch in his box.  Then the dysentery began and never stopped.”

“He seemed to be doing so well yesterday morning,”  I said.

I expressed my admiration for the excellent care he had taken of Pipinka, both he and his mother.  I just couldn’t believe how quickly the dysentery took him.  The robin-like chirps he made yesterday would never mature into heavenly robin rhapsodies.  He would never arrive from the southlands to herald the beginning of Canadian spring.  We would never know if Pipinka would come back to his adopted family after a sojourn in Florida.

Good bye, little Pipinka.  I’ll treasure the memory of seeing you fall asleep, cradled in our neighbour’s hands.  You certainly were a good judge of people.

On a happier note, other sounds were increasing in volume in Cedar Hollow, coming from the vicinity of the Swiss Chalet.  The wrens’ youngsters are becoming more boisterous each day, and their appetites have increased as well. 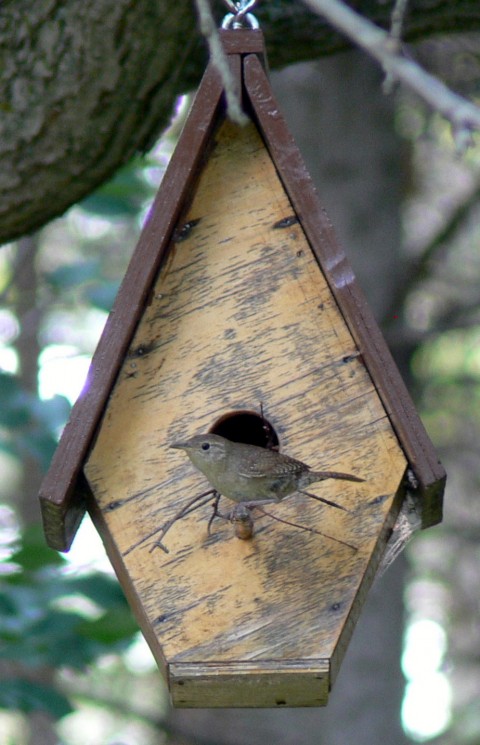 My faithful old computer conked out, and simply could not be revived.  Like the little robin, it just flopped around.  It was so impossibly slow . . . that I resorted to darning socks while waiting for it to do the next thing!   Why, I was so desperate, I even vacuumed out the dust clogging up some vents in the computer!

Our son dropped over right after work. He said that the all-blue screen I saw yesterday is often referred to as “blue death,” indicating  that the computer’s demise is imminent.

The three of us headed over to Best Buy.  Fortunately, we were served by an older, experienced salesman.  Rare experience.  John and his Dad reviewed and compared specs on different models,  and I ended up with a 23-inch touch-screen wireless by Hewlett Packard.   When I paint in the studio now, I won’t have to drag a large cable along to view photos on the monitor.

Somewhat like Apple, the Hewlett Packard’s computer is embedded around the edges of the monitor, so there is no need for a large tower.  The Geeks (that’s what they call themselves; I’m not being rude), will transfer data into the new machine.  John recommended that I purchase a HELP SERVICE for a year, one with 24-hour staff.  He knows all too well how awfully impatient his mother is when it comes to technical things.

When they were talking about how fast the new computer would be, Mr. McD asked, “How will I get my socks darned now?”  Do you have any idea?

This blog has come to you courtesy of Mr. McD’s computer.