One of the routine tasks around Cedar Hollow is making bread – an eight-loaf recipe made with one-third whole wheat flour, plus a heaping cup of ground flax seed.  A dear Polish lady who had fled two invasions in Europe before immigrating to Canada told me a secret about rising the dough:  After it is kneaded, place in into a large, greased bowl, cover it with a damp towel, put into a rocking chair with padded cushions (no other chair will do), and snuggle it round about with a blanket.  It never fails to rise in a short time.  Thank you, dear Linda!

By the way, she is also the lady who gave me some Evening Primrose plants – the ones with yellow flowers that pop open at dusk –  and also a Christmas Rose.   What delight these plants have brought to us and to friends who have received some of their offspring.

Linda also gave me something else . . . a reminder . . . of how blessed we are to have been born in Canada.  Many times her eyes filled with tears and her voice broke as she would say, “I thank God every day that I am in Canada.”

I wonder how many of us have said those words or something similar?

While Mr. McD and I sat on the lawn swing for our morning break, Bounce the Hummer decided he would take a nectar break, and sat on a leaf in the bee balm patch! 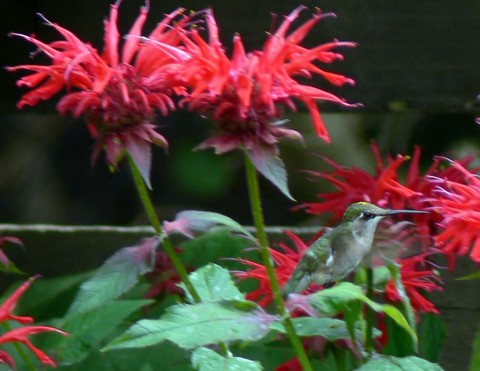 John came over after work to help trim some of the hedging in Cedar Hollow that is more difficult to reach, requiring someone steady on a ladder on uneven ground. (Mr. McD’s knee replacement was only four months ago.)  Who should John spy on top of a shepherd’s crook but Mrs. Tree Frog!  Her jacket isn’t as lumpy-bumpy as the one that Mr. Tree Frog wears, and she isn’t quite as large.  I do believe she was trying to get a tan on her pale legs. 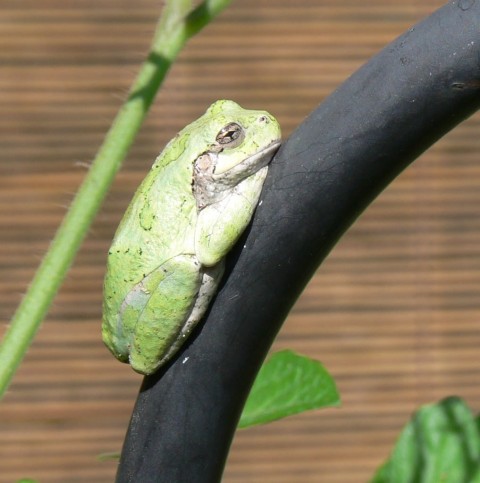 As we were eying the side of the cedar hedge up and down to make sure it was vertically straight, our neighbour came out with a cardboard box in her hands.  Inside, snuggled on soft paper towelling, was her newest charge.  “What do you think it is?” she asked. 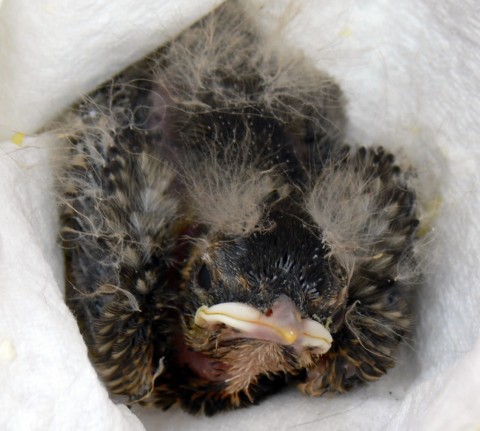 “A robin,” was my reply.  My neighbour said that after she rescued the cold wee bird, so weak it had only one eye open, a call to the Humane Society assured her that, yes, she should go ahead and try to save the little songbird.  Having successfully nurtured an orphaned chickadee when her son was a little boy, she cooked up some scrambled eggs for it.

“Come now.  Open up,” she coaxed, touching its large beak.  We watched.  The beak opened WIDE . . . and she put in a bit of scrambled egg.

“Oh, he needs a diaper,” she  apologized, as whitish excrement popped out.  “In and out”, she laughed.  And so it was.

My neighbour told me that her Rottweiler was interested in the household’s tiniest member.  She carefully let him sniff it.  He gave his approval immediately. Don’t you wonder how the friendship will develop between the pin-feathered mite and the powerful mutt?  Stay tuned.