I did some heavy lifting this week.  The boulder perch had to be moved further down the path.  Now, that took some doing, and I’m still huffing and puffing.  The Guardian of the Path was put out at first, but I assured him that the perch was still within ear shot.  He would still be able to eavesdrop on any conversations of the folks who rested on the rock.

As I began to wash in the bake apple blossoms, all of the trees brightened up, even the old sentinel.  How they loved the arrival of the bake apples.  Bake apples meant that spring was here, their favourite season of the whole year!

And do you know what they began arguing about?  Which one of them would host a robin’s nest!

Ms. Aspen and the Guardian of the Path declared rather nastily that they had never heard of a robin nesting in a pine tree, which seemed to make them feel all the more important.

From the background, the spruce trees piped up:

“Never mind the robins.  It’s the mourning doves who will nest in our cradles.  You just wait and see.”

Then the old sentinel cleared his throat and declared in his deep bass voice:

“One year I played host to the cutest family of baby coons in the whole of Newfoundland!  As soon as the moon came up, their shenanigans began.  Why, I hardly got any sleep at all that spring.” 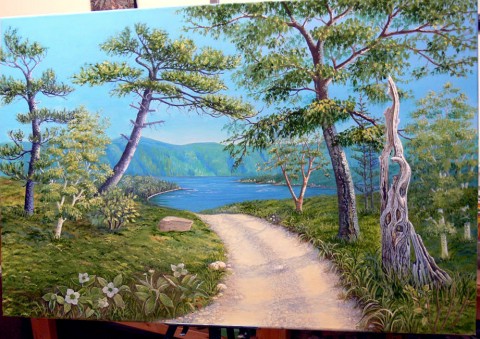