For the second spring in a row, crocuses, grape hyacinths, tulips, you name it, have been chomped off in our flowerbeds, robbing us of the long-awaited splash of brilliant colour.  As if that wasn’t bad enough, sprouting bean plants and flowers continued to be chewed off down to the ground all summer long.  Now I know why Mr. McGregor in Beatrix Potter’s tales got SO ANGRY at Peter Rabbit!!

Last year, I tried a water gun (not powerful enough).  I tried hurling stones (but couldn’t shoot half straight).  We tried a cage, following someone’s suggestion that a piece of broccoli inside would do the trick.  No way.

This week we hauled a larger cage out of the shed, pushed the back of it under the cedar hedge as far as possible, and baited it with a fresh piece of apple.  Bingo! 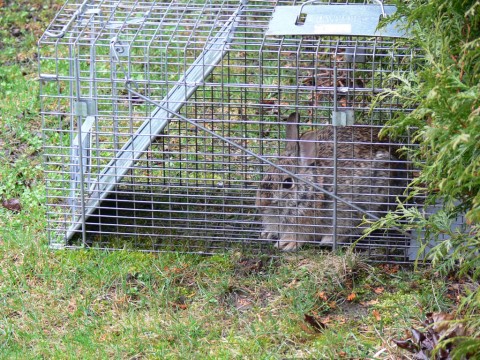 After breakfast, we couriered the critter out to the countryside.  When my husband opened the cage door beside a ditch at the edge of a woods, the rabbit didn’t head for the ditch (as all of our previously released animals have), but scooted around the front of the car, crossing the road in front of fast-moving traffic.  He had been faster . . . because we saw the white puff of his tail ping-ponging up the slope of the woods on the opposite side of the road.

We reset the cage when we got home to try and catch his mate.  May they soon be reunited!

Maybe grape hyacinths will bloom around here after all . . . instead of becoming some wretched rabbit’s salad!

And that is your excerpt for the day from the edge of the big woods.