The pathway has been nattering away that it was sick and tired of going straight!  It was bored, and wanted to curve to the left . . . so I finally gave in.

At least the tabletop mountains in the background are content, as they’ve  been clothed in their greenery of aspen, tamarack and spruce.

Next week I’ll give the sticks, the “hope-to-be-trees,” their branches and leaves.  The old pine will have to be patient, and reign in its ego.  The wash is all it’s getting until its neighbours look a little more respectable. 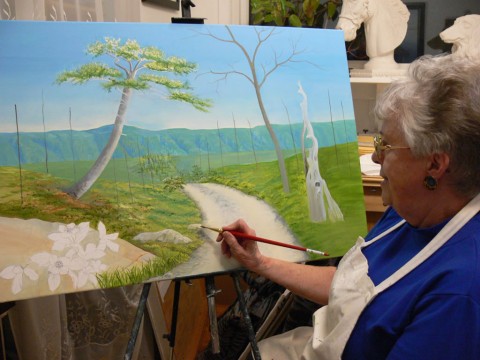 The mileage sign is yattering, too, but I’m not paying the least bit of attention.  If I’ve told it once I’ve told it a hundred times . . .it’s not going to be put in place until the area is treed.  By the time the tourists have hobbled this far, they’re probably pretty fagged out, but it’s not my fault.  Rome wasn’t built in a day, and this painting won’t be either.   They’ll just have to keep guessing how far it is to the boat, that’s all.