Early December, I picked up two gift boxes of amaryllis bulbs.  Photos on the boxes promised luscious tropical blooms.  I could picture them already!

Before Christmas, I decided to pot them up.  Inside the first box, a grotesque stem of amaryllis stared back at me, scrunched inside its dark tomb.  White as chalk, the stem, of normal thickness, kinked sidewise as far as the box allowed, bud and all.  Carefully, I put the bulb in its pot, and tamped the packaged earth around, letting its shoulders stand free.  The disappointing sight was placed on the wide kitchen windowsill.

It was too late to change the stem’s horizontal posture into an upright one.  It would simply break.  In a few days, its bud began to open.  Sunlight soon brought pink colour to its cheeks!  It bravely continued on, opening three other buds, which now matched the beauty of the pink blooms on the box!  I’ll call this bulb Ama.

The bulb in the second box appeared normal, with a hopeful tip of green showing on its crown.  It caused no concern, and was duly potted up and watered, and set beside its deformed cousin. I’ll call this one Ryllis.

What was surprising was the energy and determination Ama displayed!  Shortly after being planted, she began to produce another stem.  Yes, she would uphold the pride of the amaryllis family, and, this time, she would not be pitied by anyone who saw her!  She would do ‘em proud!

Daily, I rotated both flower pots. 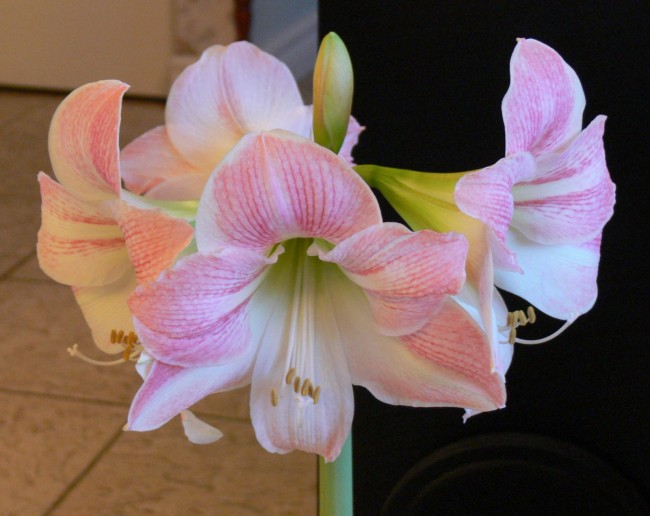 Ryllis has been a flop, literally.  Twice, some of her gangly leaves flopped over, and had to be cut off, leaving her now with one leaf and no flower stem. She’ll end up in the green bin, that’s what.