Spring, summer, fall . . . I checked them all, all of the local nurseries. I was hunting for the pink Obedient Plant, but they only had it in white.

Although it was November now, I couldn’t forget how lovely the spikes of pink flowers were that I photographed in one of Brantford’s public gardens two summers ago. Having never seen them before, I emailed the photo to a nursery, which identified them for me. Apparently the Obedient Plant is native to North America, where it is distributed from eastern Canada to northern Mexico, and blooms in late summer when most perennials are fading.  An amazing thing about these flowers, so they tell me, is that you can move or twist an individual floret(s) to whatever position you want them to be in, and they will stay put, which is why florists love them. 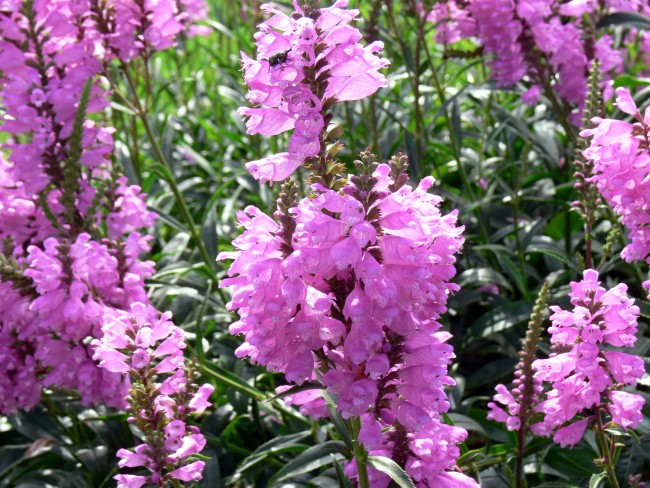 Brainwave!  I’ll contact the Master Gardeners and see if one of them has such a perennial.

Through the library’s helpful Info Link service, I obtained a phone number, and left a message–my plea for a piece of the pink Obedient Plant.

Gwyn phoned, a master gardener, and, yes, she had the pink Obedient plant, and I would be welcome to come get some!  She was going out for lunch, but we could come by at four.

The directions were unusual.  Two miles west of a small village on the opposite side of Kitchener, we were to look for a lane which cut through the middle of a woods on the left, its number posted on the roadside.  There were two other homes in the woods which we would pass, but we were to keep going until we reached their place at the top of the hill.

The weather was balmy, in fact, record-breaking with temperatures in the 20s.  We found the lane that cut through the woods all right, but as we continued to wend our way around the trees, we could hardly tell if we were on the lane or not because of the thick bronze carpet of fallen leaves.  Soon we saw a building through the trees up ahead.

There was no one at home in the large board-and-batten house.  Two white poodle-mixes barked valiantly behind a big window. Presently, the master gardener and her husband drove up. He invited Lloyd into the house while Gwyn took me on a tour of the spacious grounds. Before setting off, I gave her a clump of cala lily that originally came from Guatemala, and produced white, leather-like blooms often seen in wedding bouquets.  It was ready for its winter nap indoors.

Gwyn explained that she once had perennial beds galore, a large greenhouse, and a swimming pool.  As time went on, however, outdoor work had to be pared down, and the greenhouse was dismantled.  The swimming pool was changed into two individual, curved ponds looking so natural with some cattails and water lilies in them.  Someone still comes in to help her with the large vegetable garden.  Carrots and parsnips lay in a wheel barrel by the door.  From this hilltop perch one could see the surrounding farmlands stretching out to the horizon field by fence post, stream and woodlot.

As Gwyn identified the spent stalks of a clump of pink Obedient Plants in a flowerbed by the house, she asked sisterly-like, “Are you a digger?”

“Yes!” I replied without hesitating.  “I LOVE digging!!”

No one had ever asked me such a question.  Only a master gardener fully understands the energizing, creative surge one experiences when powering a garden shovel into the earth by means of one’s foot. Repeated pushes might create a curved flowerbed, or prepare a hole in which to plant some fragrant rose bush–some green wonder to bless the world for years to come!

In no time, the two of us had a large clump of the sought-after perennials bagged and stowed in the cargo area of the Smart car.

Entering the house for a cup of hot tea which she proffered, we found the men engrossed in conversation in the living room.  And what a room!  Designed by two architects 40 years ago, and built from timber on the property, it featured massive maple beams, a stone floor-to-ceiling fireplace, an end wall filled with books, a cherry-sided dining room with the largest harvest table I have ever seen, a balcony overlooking the great room where vibrant greenery hung from the high ceiling, and, off the kitchen, a cold room to store produce and jars of fruit. The tiled floor of the window-studded kitchen was heated by hot water pipes, as were the bathroom floors.

Sitting there, I verbalized the thought that because they had become so accustomed to these surroundings of mellowed wood and stone, they could not possibly realize how relaxing and beautiful the home truly was.

Our conversations covered the gamut of the recent federal elections, the exotic flowers and fungi of Australia, where one of their sons live, the challenge of aging (experienced by each of us), their two-year stint in Nigeria where he was sent to build a school of engineering under the auspices of the University of Waterloo, and the miracle of a recent kidney transplant which he was grateful for.

At last, Lloyd and I reluctantly took our leave, but not before getting their phone number. Time had flown, and supper  was long overdue,

As I gave Gwyn a hug and kiss good bye, her husband asked where his kiss was.

“Give him a kiss,” Gwyn coaxed.  This was also a first for me. No wife has ever asked me to kiss their husband before!  I planted a kiss on both of his friendly, bearded cheeks.

Thanking them again, we began our descent from the enchanted home in the woods and its hospitable owners.

As soon as the rains tapered off the next morning, I happily dug in the clump of pink Obedient Plants in the garden by the sidewalk. 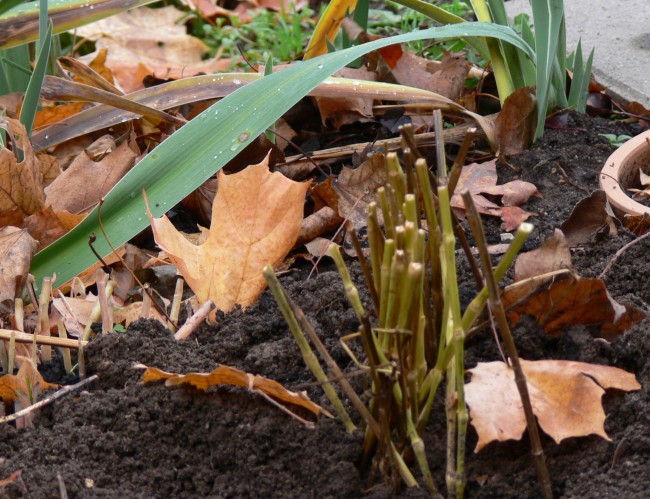 The weather forecast said that the record-breaking warm temperatures we had experienced would plunge, and in a few days would fall below zero, with possibly some snow.

Looking back, I marvel at the master gardener’s prompt reply to my late-in-the-season plea for the pink Obedient Plant. Just 48 hours later, and I wouldn’t have been able to dig the plants out of Gwyn’s flowerbed.  The ground would be frozen, unable to release the gorgeous plant I had fallen so in love with . . . but could not buy anywhere!