Things have been pretty quiet in the studio, but I did hear the twin aspens on the right call over to Ms. Aspen to thank her for expediting the arrival of their “clothes.”  She acknowledged them with little more than a sniff.  I thought she could have been more pleasant.

In the distance below, some houses appeared on the coastline of Norris Point.  Don’t some folks have an idyllic place to live?

I was working on the lichen-crusted trunk of the largest tree, when it spoke up.  I nearly dropped my brush!

“If you don’t mind me saying so, we need a perch around here.”

“We need a perch around here, I say.  Why don’t you flatten the top of that big rock so folks can sit a spell and enjoy the view?  It would do them a world of good.”

“That’s a capital idea!  I’ll get right on that next week.”

“And another thing, where is all the ‘tracery’ you talked about earlier?  Anybody knows that a significant tree like me casts shadows.”

“And what’s all this talk I heard you and Mr. McDonald doing today?  You were saying something about putting me on e-Bay?  Now, don’t get any ideas in your head of yanking me out like you did Ms. Aspen.  I like it here by this bay . . . the Norris Point bay.”

“Not to worry, Ms. Guardian of the Path.  You’re in just the right spot!  But thanks for your idea of the perch.” 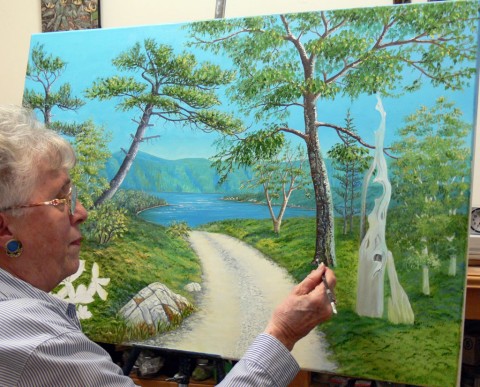 1 thought on “We Need a Perch Around Here”