After the pre-Christmas ice storm, I opened our side door  to take the mail in.  The pointed evergreen that sticks six feet above a neighbour’s roof caught my eye.  It was bedecked with stars!!  It really was!  I ran inside for the camera.  The afternoon sun caused each icy tip of the spruce to twinkle brilliantly like a star!  What a sight! 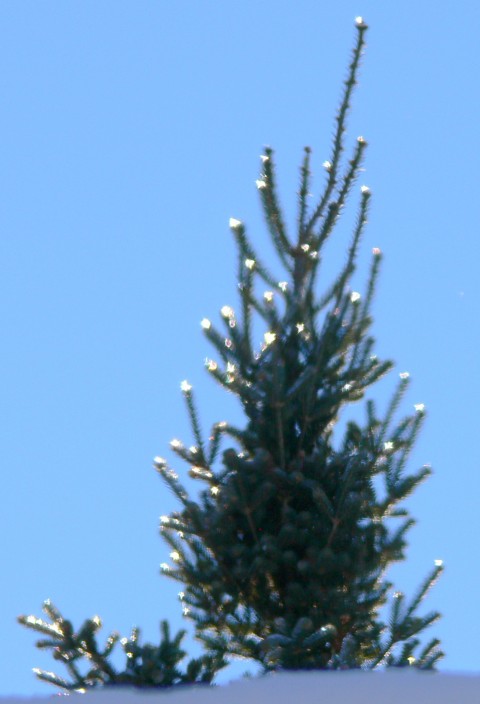 A few years ago, Lloyd built a yard-high star and outlined it with a rope of white lights.  From atop the miniature pear tree, it beamed its reminder to passersby at Christmas that it was a star in the heavens many years ago that informed wise men in the East of the birth of a Jewish king. They knew from this special star that He was none other than God incarnate.  We read that when they finally arrived after a long journey, they “worshipped Him.”

One of the greatest understatements in all of literature is found on the first page of the Bible in the sixteenth verse: “He made the stars also.”

Today we are constantly learning that the Hubble telescope and other such instruments are still finding galaxy after galaxy that they hadn’t seen before.

Can you grasp the wonder of Psalm 147:4?  “He telleth the number of the stars; He calleth them all by their names.”

How many names can you come up with?