Returning to Canada in 1984 after eleven years on Bonaire, Caribbean Netherlands, I sketched drawings depicting the plants, animals, birds, trees, houses, and children, and had a colouring book published, with captions in the local language of Papiamentu, Dutch, and English.

When John and Joanna were on Bonaire this summer, they took some copies of the colouring book into a bookstore to see if they would be interested in selling them.  The owner was enthusiastic, and has given me a contract for the artwork.  He has undertaken to publish Colour the ABCs on the island, add Spanish as a fourth language, and market the books in the Dutch islands.

From John and Joanna’s photographs, I found a few corrections should be made—-an incorrect bottom fin on the queen angel fish, the iguana’s chin needed a waddle, and the thorn branch was misnamed.  I set to work to correct those pages.  John shared the artwork files on Google Drive (the cloud) with the bookstore owner.

Stay tuned for further developments!  I’ll let you know when Colour the ABCs will be available directly from the bookstore on Bonaire. 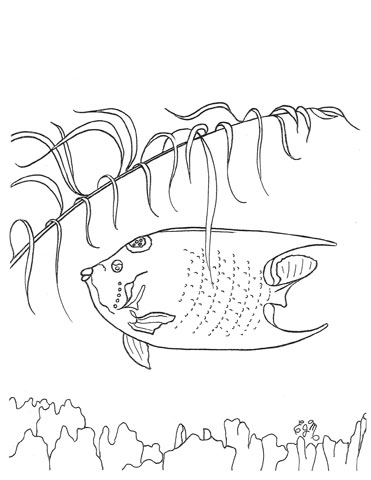