Nearing the completion of a painting, I  experience a bit of restlessness, wondering what to paint next.  I spent a few days on the computer going through photos taken during our trip out West in the summer of 2011.

Lloyd and I boarded West Jet at the Regional International Airport situated on the eastern outskirts of Kitchener.

Due to headwinds, our arrival in Calgary was later than expected.  We barely had time to catch the next flight to Vancouver.

I loved the smartly trimmed cedar hedging around many homes in Vancouver. It wasn’t the white swamp cedar which surrounds our home (named Cedar Hollow).  The leaves on these tall hedges were finer.  And how exciting it was to see palm trees!

In the ferry we took over to Vancouver Island was a long transport housing show horses on their way to a competition.  They stuck their beautiful heads out of their stalls, and enjoyed a handful of fresh hay from  their handler.

Butchart Gardens in Victoria taught me something I’ll never forget!  Make sure to have two camera batteries on hand! 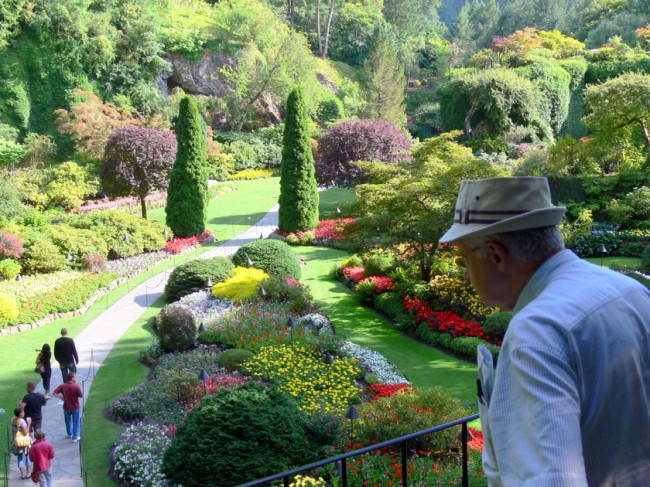 Clicking Butchart’s unimaginable beauty constantly, my camera ran out of steam just as we entered the Rose Garden.  I could have cried . . . .

The magnificent parliament buildings and the impressive Empress Hotel were designed by a young Dutchman who stood in marble on a monument, blueprint papers under his arm.  Inspiring sayings were embedded on many of the stained glass windows throughout the parliament buildings. 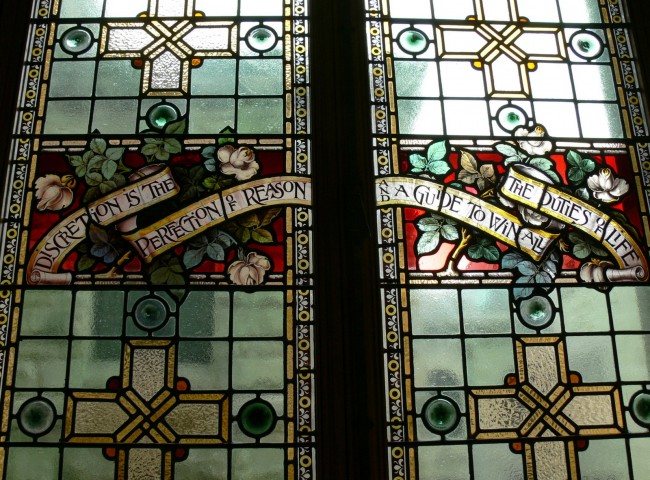 Placed in the landscaped grounds of the ornate parliament buildings was the statue of a young Queen Victoria, so different from the matronly one in our city. 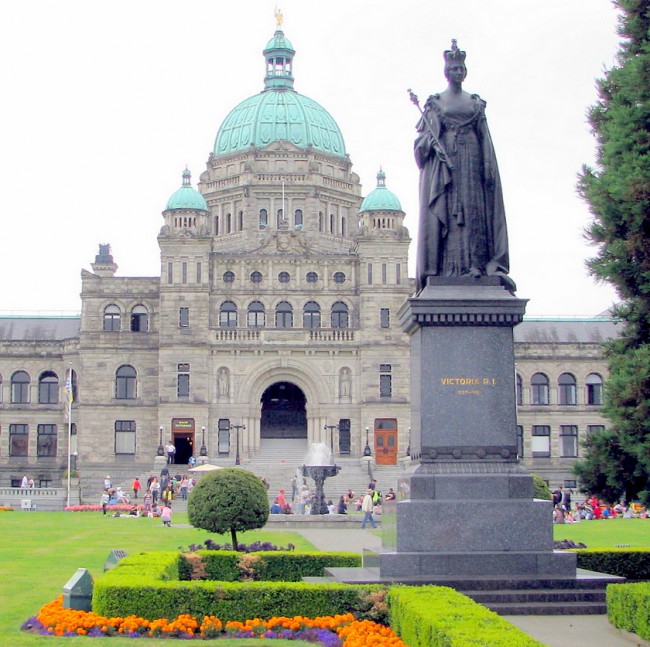 Hanging baskets of flowers were everywhere in Victoria.  Unusual evergreen specimens bowed their heads and drooped their arms on either side of the entry to the  Empress Hotel. 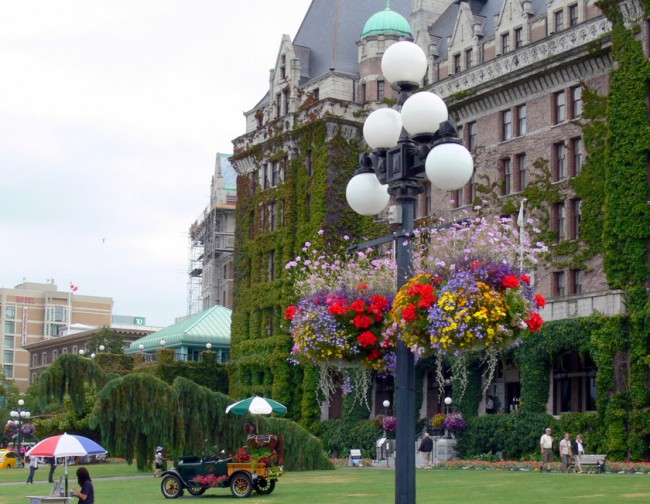 Returning by ferry to Vancouver, we were fascinated by jellyfish pumping their delicate, frilly selves about in the huge aquariums. 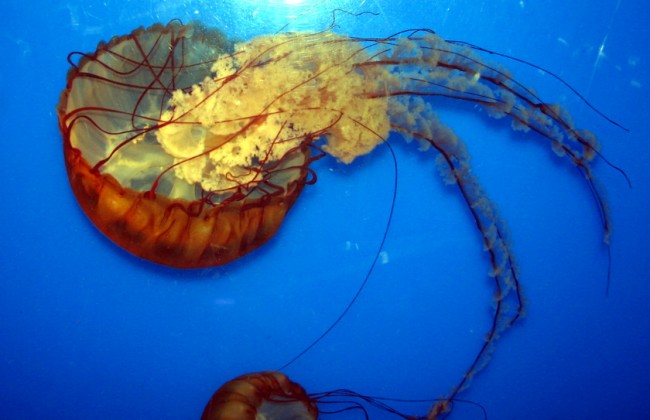 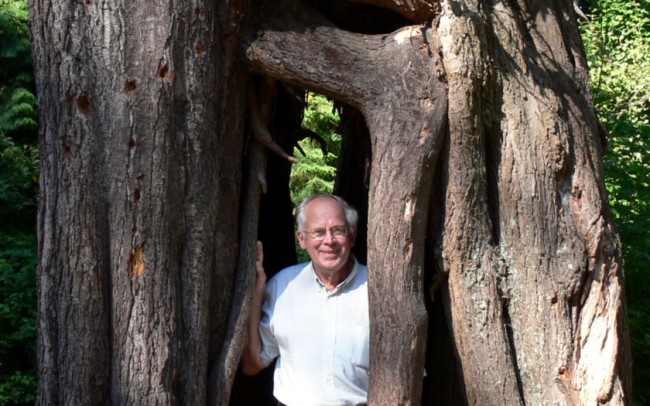 Booking into a hotel, we received an unpleasant jolt in the form of a letter handed to us by the concierge.  It was from the Rocky Mountaineer Railway we were to board in the morning.  They advised us that due to a strike they were experiencing, management would be standing in.  Picketers were in plain view as the “All aboard!” call rang out. 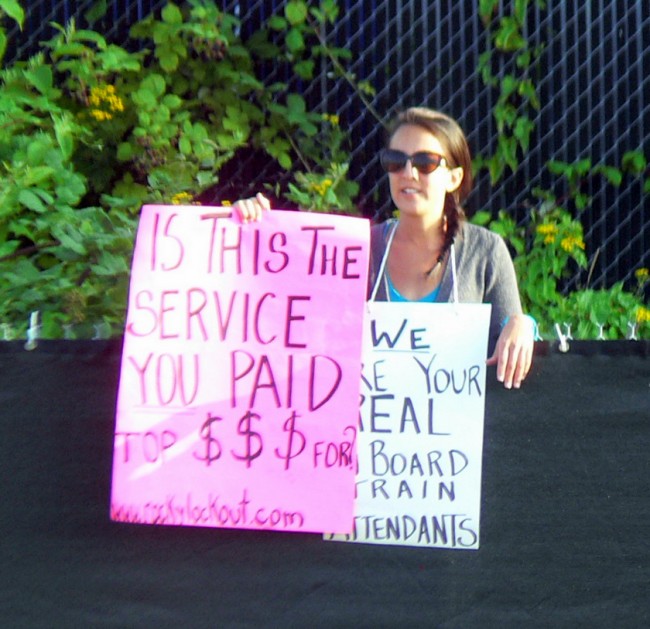 Although they tried their very best, management could not possibly relate all of the anecdotes of information that the regular train attendants would have, and often could not prepare us ahead of time to be ready to click a spectacular scene that was coming up just around the bend.

If we were doing it again, we would not have chosen the Redleaf cars, but the more costly ones with the upper domes, the ones which served hot meals.  Also, we would have taken the route that goes to Jasper instead of to Banff. The only wildlife I saw was painted on a sign, “Beware of Bears!”  At the local market, after returning home, a man waiting in line for some ground beef was from the West, and said that the Jasper leg of the trip would have guaranteed viewing bighorns, something I had really wanted to see.

Nonetheless, reading between the lines, you must have guessed that we snapped lots of beautiful scenes . . . given that it took a two-day sort to decide on the next painting!

What size is the canvas?  30” wide by 24” high.  Sketching, the fiddly part, is mostly over, and next week begins the fun of picking up the paint brushes!

Come along with us as the engineer slows down to take the curve to the right! 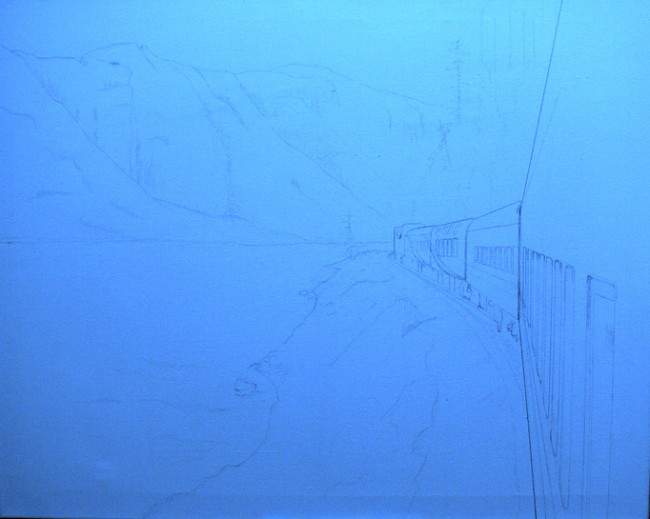