Friends took us on a tour this week of the St. Jacobs countryside where they were both raised, and we enjoyed driving down the lane to both of their former homesteads.  One lane was a half-mile long!  By the beautiful white-brick farmhouse, with a bay window on the ground floor that continued up to the second storey, the car was turned off so we could listen to the sheltered stillness.

Our quest was to see bluebirds.  Arriving at the bluebird house our friends had been assured had babies, my husband dutifully trundled out the  tripod for my camera. 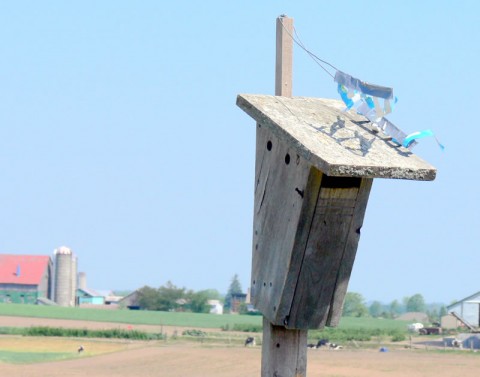 However, a wary mother bluebird was not impressed with our intrusion, and absolutely refused to go to her nursery.  She hung onto the green worm in her beak, flew hither and yon, but always returned to the hydro wire, not the nesting box. 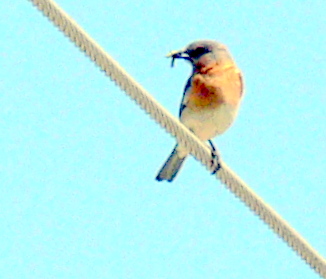 Next time, we’ll mind our manners and stay in the car, and let mother bluebird care for her young in peace.

Down another farm lane, we came upon a frustrated mother oriole.  The farmer had put up a woven ‘string fence’ alongside his strawberry patch.  Mother oriole was tugging at the string, and going into all sorts of contortions, which gave us a glimpse of her vivid, golden underside. 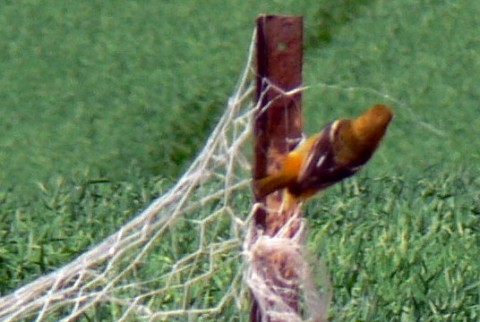 I just know there’s enough string here to build my entire nesting bag.  I’m plumb tuckered out!  No matter how hard I tug, the silly old string won’t let go.  Must be that wretched nylon stuff.

Give me that old fashioned twine any day, and I’ll show you how to weave a nest in no time flat!