The alien from outer space has been identified, and we won’t be carried off by little green men after all!

A friend who reads the blogs said it was a hummingbird moth.  I went to the Internet, and, sure enough, she was right.  Let me share a small picture I found that will give you a better look at the moth than I was able to photograph for you yesterday when he was halfway inside the dark petunia.  This photo also shows his long tongue. 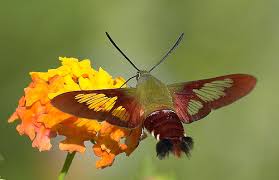 The hummingbird moth returned to the petunia patch after supper.  Funny, but just knowing who he was made me unafraid of him.  And doesn’t he resemble a hummingbird in many ways?

Thankfully, the rainy morning gave way to sun in mid-afternoon.  A black squirrel began to eat a walnut on top of the branch holding the Swiss Chalet, and he was perched only a few feet from it. 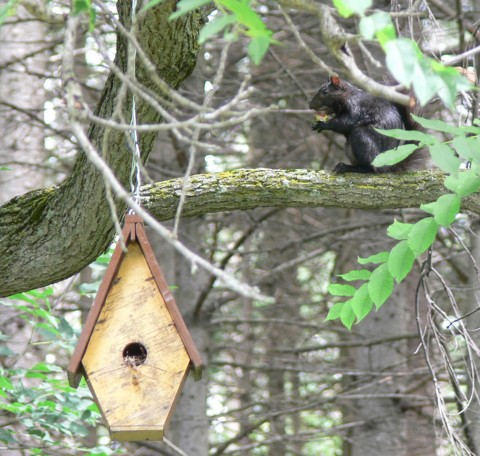 Lord Wren torpedoed him not once but three times! !  He dove right down at him, cuffing him on the ear!  I saw it!  The squirrel almost dropped his walnut . . . but hung onto it.  Talk about a David and Goliath situation!

The squirrel ambled as far down the limb as he could, and sat down to continue his repast, not  flustered in the least.

I had read that wrens were feisty, and this was proof!

It’s one thing to chase off someone who is too close to your home for comfort, like the black squirrel, but I’ll have to check out the Landlord and Tenant Act.  When we leased the Swiss Chalet to Lord and Lady Wren, we thought it was understood that the Agreement included the entire canopy of the Black Walnut tree, and nothing more.  Now they think they own the whole knoll below it!

Now, tell me, have you ever asked a wren why he didn’t read the fine print before signing a Rental Agreement? Ve get too soon oldt undt too late schmart!

I was returning from putting the wheelbarrow behind the garden shed, and had to pass beneath the Swiss Chalet as I headed toward the steps.  Lord Wren lit into me full blast.  He was practically cussing me!  Imagine scolding your landlord!!  What’s this world coming to?  And what’s the good of filing a complaint with the Small Claims Court?  By the time it gets on the docket, the wren family will have moved out, and no one will be able to serve the summons!