“Just forget about it.  Nothing is going to happen.  It was probably just a crank call from some old kook in a nursing home,” Lloyd said.

What a bizarre experience.  A brief email from a stranger stated that they were building a beautiful home, loved my painting of Secretariat, and would I phone them at such and such a number. 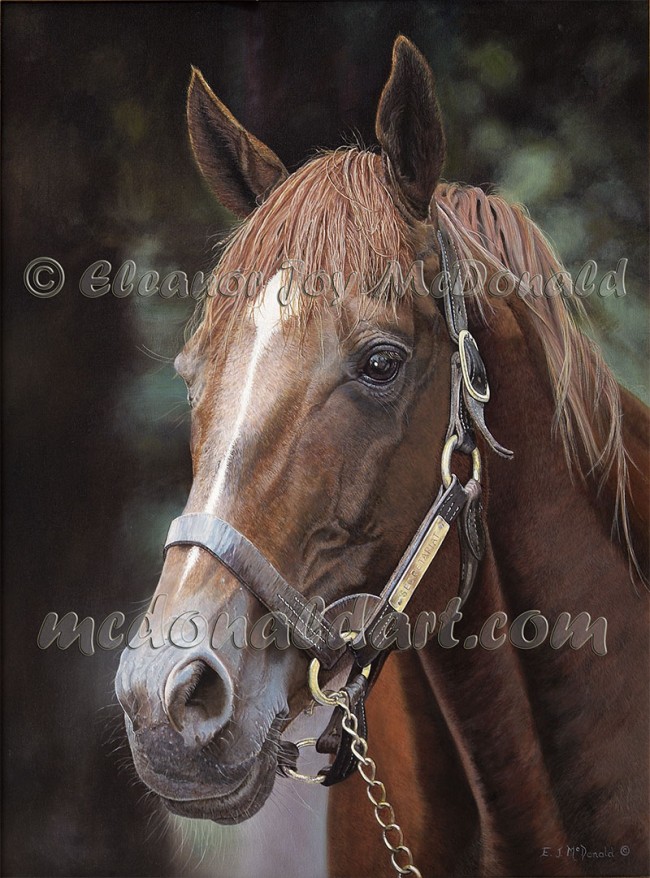 Someone answered Hello, then immediately hung up!  To make sure I had called the correct number, I carefully punched in the digits once more, received no answer, so left a message.

A few hours later, I tried the phone number once more, and asked to speak to the e-mailer.  What ensued were the unintelligible sounds of children chattering and laughing!

The first two letters of her email address were dr.  Perhaps she was a doctor.  Perhaps the receptionist picked up the phone, sat it down on the desk, and what I was hearing were children in the waiting room.  Puzzled, I hung up, and emailed the lady about my unsuccessful attempts to contact her at the number she had given.

A few hours later, Christine Grant, the rancher in Utah, phoned.  She apologized for forgetting to take her cell phone with her, and said the grandkids had been playing with it.

Regarding her intent to commission a painting of horses, more than once she stated, “I’m dead serious.” She seemed absolutely smitten with the detail in Secretariat and especially his eyes.  Our son, John, who is our webmaster, created a feature on mcdonaldart.com that enables viewers to enlarge photos of paintings, and Christine had obviously done that.

Christine gave me the size of the canvas to be hung over a stone fireplace in their cherry-panelled library, and emailed me a photo of a horse she liked.  Unfortunately, I could not use it as reference material, because it was taken of someone else’s painting.

Christine asked if I would I help her look for a photo of horses.  She would phone me in a week’s time.

I spent a few days looking at an endless number of horse photos on Shutterstock’s website, narrowed my choice down to three, and submitted them, sending my favourite one first: two magnificent stallions nose to nose, whose intelligent eyes illumined their gorgeous faces.

Christine phoned back in four days, saying she could not find anything she liked better than my favourite. I was delighted! However, neither of us liked the chopped off manes on both horses, so it was agreed that I would lengthen them.

Negotiations commenced re pricing.  This painting would be three times the size of Secretariat.  We settled on C $15,000.  A deposit of 25% was wired, and the work commenced. 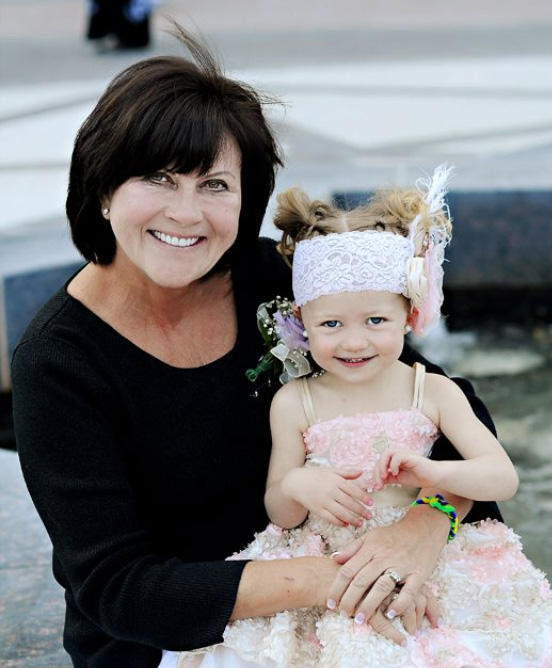 Lloyd hit the jackpot when he went shopping for two sturdy easels to hold the long canvas, getting two oak easels for the price of one at  Michaels!  The ever-present need to change the height of the canvas during the painting process was made easy by their ratchet mechanism.

Lloyd rejected the first custom-made canvas we ordered, and consulted with an art supplier in Guelph to get heavier canvas, but utilize the frame from the first one.  On a very snowy day, Lloyd fetched it home in our Smart car.  Had it been ½” longer, he could not have got it in! 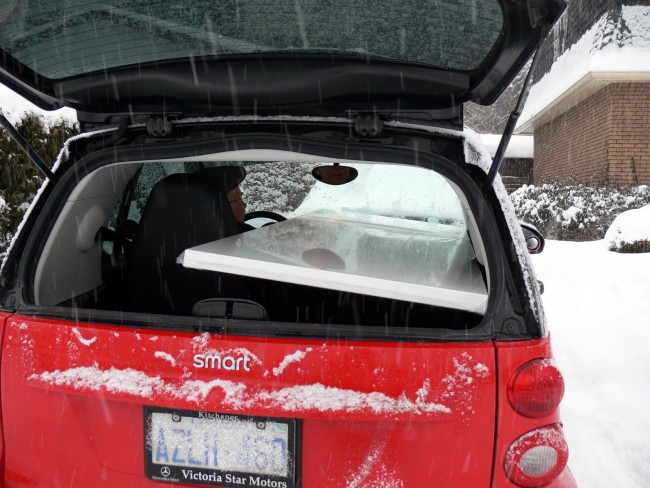 The detailed pencil sketching of the horses was done over several days on a long sheet of paper. Searches continued on the Internet to find other horses in similar poses because the source photo did not show the side of the sorrel horse or part of the black one’s back.

The outline of the horses was traced onto the canvas.  To obtain a smooth surface for the detail on the horses’ faces, Lloyd helped me apply eight coats of Gesso, sanding in between each application.

Now it was time to use tracing paper to put the detailed drawing back inside the outline on the canvas.

In order not to muss up the edges of the horses, I worked on the background first.  Various things were tried before settling on the river, the back fence, and the tree.  Other misadventures remain a family secret – a definite advantage of working in oil! 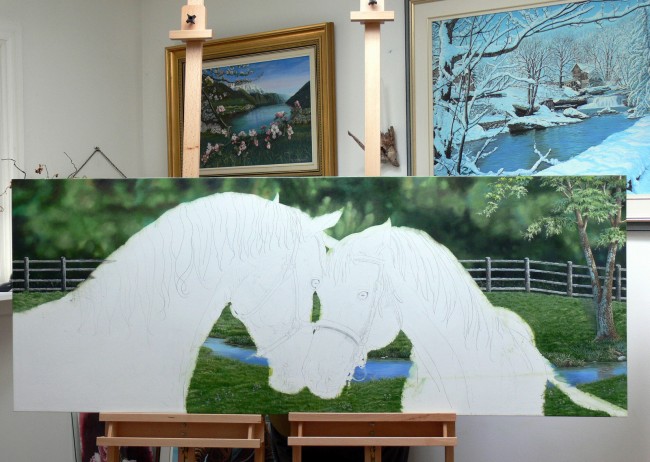 From start to finish, the creation of Diesel and Shorty was a seven-month process.  The Grants chose the title in honour of two of their ranch horses who were retired but were kept on as pets.

The trust the Grants exhibited and the lavish encouragement they channelled my way was incredible!  We were able to communicate openly and honestly with each other throughout the creative process, and have become good friends.  I endeavoured to email them photos of the work at various stages.

My husband’s right knee replacement surgery in mid-September spurred me on to complete the work prior to that time.  As several friends said they wanted to see the painting before it was shipped to Utah, we ended up hosting an open house for its unveiling on September 12, with an article in the arts and culture column of the local newspaper one week before.

The turnout was gratifying, some coming from a distance of over two hours away.  Many were horse lovers.  A couple ladies from our church acted as gracious galleristas.  Our son did as well, taking photos of the event.  We couldn’t have pulled it off without his help. 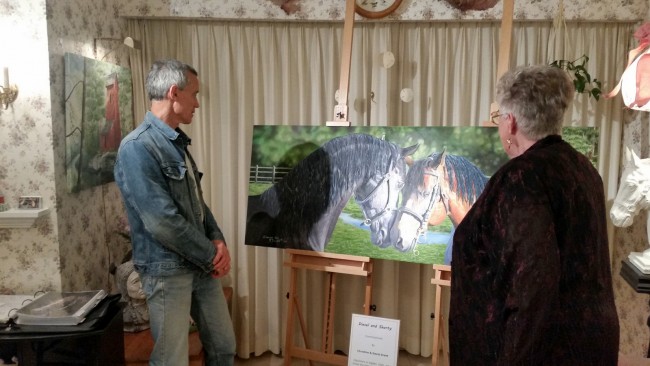 Interestingly, we also had a four-legged viewer!  A neighbour, with his very calm, blue-eyed husky, intently viewed the painting together. 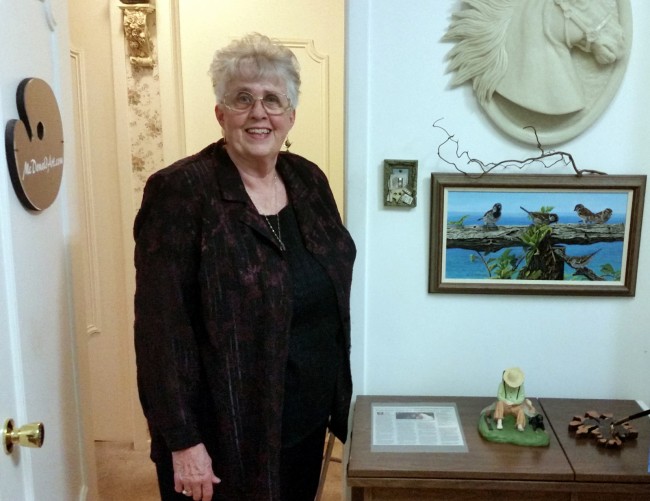 While the painting continues to dry before it is shipped in the wood crate Lloyd built, my husband and I experience continued thanksgiving to our Heavenly Father Who orchestrated all of the above, and enabled me to complete the commission! 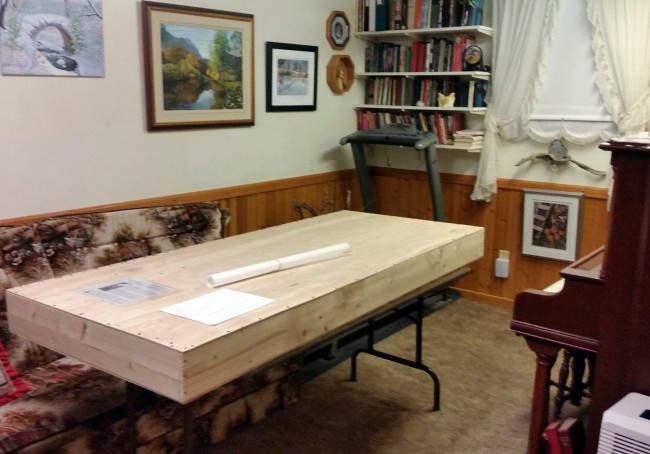 Things happened beforehand that we didn’t know were preparatory to the work that would be coming.  A year ago, my office computer died, and we ended up purchasing an additional computer for the studio.  It was extremely  helpful to be able to enlarge the photo purchased from Shutterstock whenever I needed to see certain details more clearly! 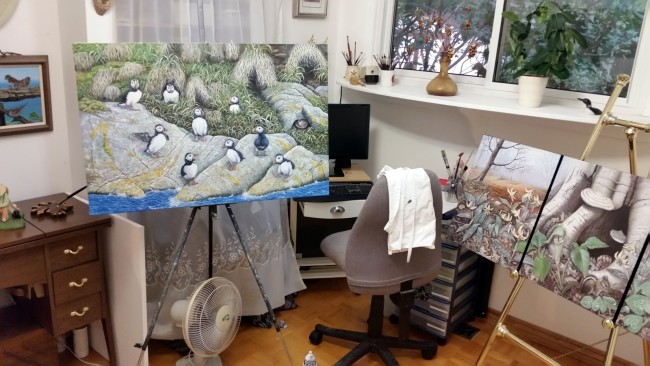 During the winter, Lloyd had installed an insulating blind over the studio skylight, which let the daylight through beautifully, but kept out the heat.  Otherwise, it would have been difficult to work during hot days as we restricted using air conditioning to off-peak hours.

I’m grateful also to my husband, Lloyd, and son, John, for their honest critiquing throughout the process . . . risking a bonk on the head! 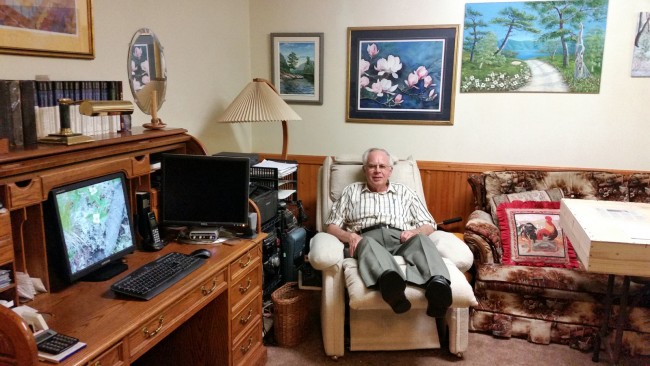 Lloyd is ready for the big day

Should I be glad that I made Christine cry when she saw a photo of the partially completed painting?

Should I be glad that I made her speechless when she saw the completed work?  Yes, that’s exactly what I hoped to do, what I strived to do, and only God’s goodness enabled me to accomplish that.

Approved and signed painting of Diesel and Shorty

3 thoughts on “The Story of Diesel and Shorty”