Going out to fill the hummingbird feeder, two evening primroses said Good Morning!  They had opened at dusk the previous evening, unfolding from a bud to a full flower within a minute or so.  Because I was up with the birds, their frocks were still as lovely as when they unfurled in the moonlight.  In a few short hours, however, they will shrivel into unsightly blobs.  The speed of their deterioration is as surprising as the speed at which they open!

The tree frog was lurking between the shed doors again this morning, but I opened them very carefully . . . stealthily would be more like it . . .  so as not to disturb him.

Shortly afterward, a stately butterfly came by to see what was so special about this shed and its doors.  I doubt very much if she would ever consider spending the night between its doors!  I forgot to ask her which  newspaper she was doing an editorial for, but she looked like a very precise journalist, if you ask me, and believed in first-hand observations, the hands-on type, you know. 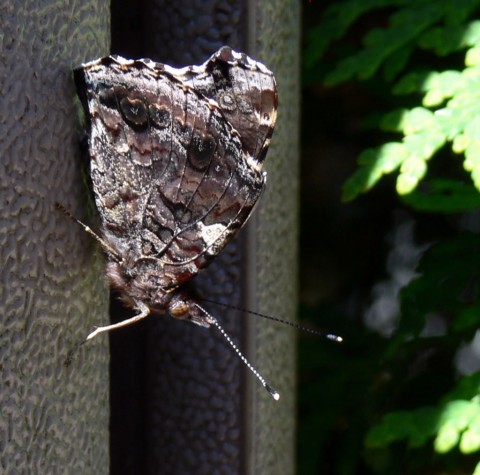 What a day for hanging out the sheets!  No humidity.  Blue sky.  Zephyr breezes.  Even the worst old grump in Waterloo County wouldn’t be able to come up with a complaint about the weather if you paid him a fortune!  The miracle of it all is that in spite of all the pollution in our modern age, sheets on the line smell so sweet when you bring them inside.  Our Maker has some amazing secrets! 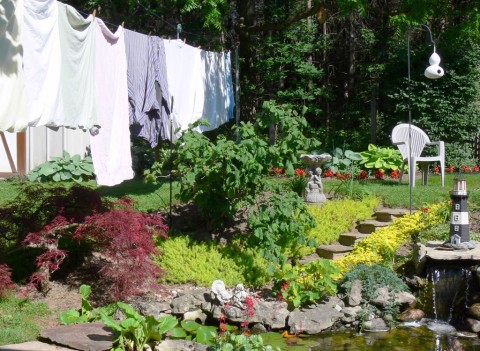 A couple near Princeton graciously let us come out this afternoon so Mr. McD could take photos of their American Black and Tan Coonhound. Mr. McD is working on a sculpture of a barefoot back-woods hunter who is slumped against a tree stump, sleeping, rifle on a rock nearby, and his faithful hunting dog at his side.

What a patient model Molly was (I think that was her name).  Pictures from all angles were taken.  These hounds have amazing noses, and during competitions, they must follow very precise rules.  A bunch of coonhounds are released at the same time, and must run without yapping.  As soon as one of them picks up the scent of a coon, he gives one bark.  When he gets to the tree where the racoon is located, then another set of commands takes over, and he howls incessantly, standing on his hind legs with his front paws on the tree trunk as high as possible.

There is no shooting in this sport – just keen competition to see which dog has superior scent- identifying ability.  The coonhound can move his long silky ears in such a way that they funnel scent toward his nose.  The owner showed us the pedigrees, and many award certificates in varying categories won in Canada and the States by his coonhounds.

Best of all, these short-haired, just-the-right size dogs, though not so well known, make wonderful house pets!  When Molly looked at me, her golden eyes beamed love and acceptance.  Know how good that feels? 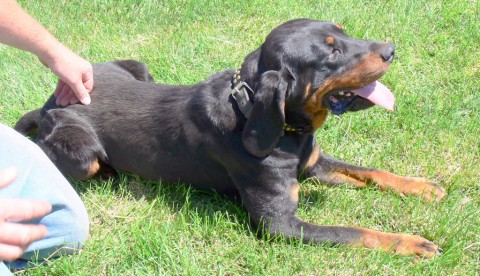 Lady Wren assured us that everything was OK at Cedar Hollow while we were away this afternoon.  She reported that a black spotted dragonfly spent a bit of time sunning himself on the gate, and that a blue darning needle zipped by, checking out the pond.  The Grand River is beyond the woods a good piece.  Is it possible that the darning needle has a good nose, too, and that’s how it found our pond?  There’s one thing sure . . . it doesn’t have long ears that help pick up scent! 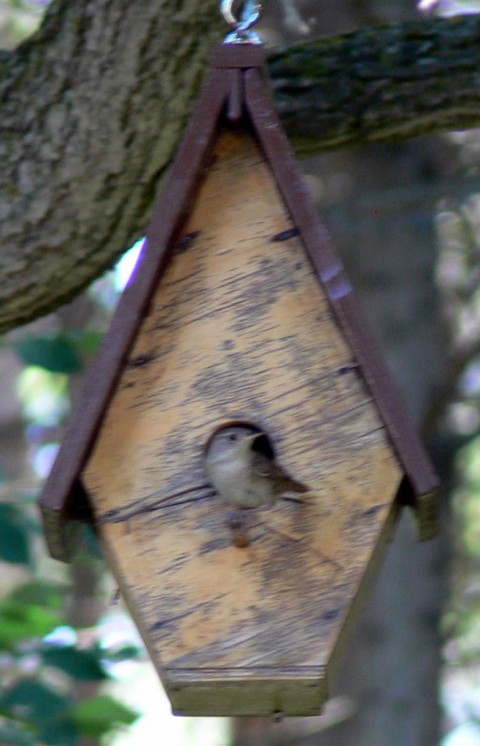