John’s car is once again parked in our driveway.  If winter decides to get serious during his February-March sojourn in the Caribbean Netherlands, we won’t have half as much driveway to clear!

Jasmine, his social Tonkinese, is the cat in residence on the 11th floor of Queen’s Place, getting requests to go here and there for a visit by folks other than the two parties on that floor who volunteered to care for her during his absence.

With the Canadian dollar dragging its boots, John realized he wouldn’t be eating in many restaurants this time around, but would have to resort to cooking.  I made up a booklet titled Bachelor’s Cookbook, with easy-to-fix recipes, many of which are family-sized, so he won’t have to cook every day.

Friends found John a modern ground-floor unit at Stay and Dive.  It has a kitchenette, air conditioning, barbecue, small outdoor pool, and private front porch, and is located close to other dive shops and friends at TWR.  (John’s unit is the middle one.) 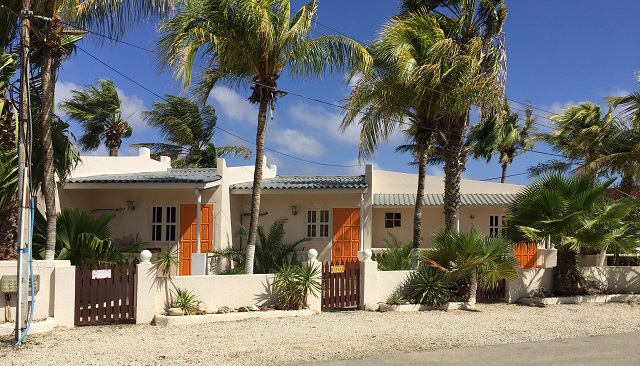 His dive tanks awaited him, which were stored on the island . . . along with thrilling adventures in the incredibly beautiful waters of Bonaire!  Thrilling adventures also await those who dive vicariously with him. . .  by means of his blogs: